Get "My Body is Mine Again:" A Free Vaginal Rejuvenation E-Book 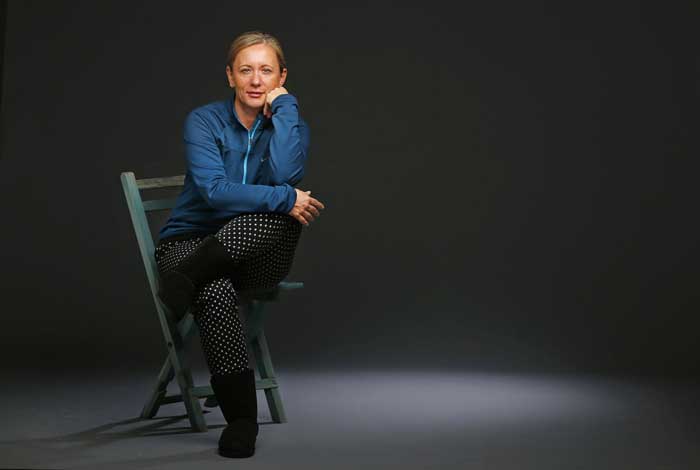 Margaret Oliphant, 42, a Texas nursing student had vaginal surgery in 2014 to treat urinary incontinence and constipation.
“Whether a woman does vaginal reconstruction surgery for medical or aesthetic reasons, it’s her choice.”

She endured incontinence and internal and external stretching of her vagina, which caused pain and discomfort during routine activities.

The 42-year-old nursing student from Copperas Cove decided to do something about it. Last year, she underwent a labiaplasty and other procedures known as “vaginal rejuvenation” surgery.

Oliphant is among an increasing number of American women who are undergoing such surgeries, according to the American Society for Aesthetic Plastic Surgery. The number of patients undergoing labiaplasty, or surgery to trim the lips of the vagina, rose 49 percent, from 5,070 surgeries in 2013 to 7,535 last year.

Other rejuvenation procedures include tightening the vagina, repairing the hymen, removing skin around the clitoris and etching ridges on the inside walls of the vagina (Vaginal Rugae Rejuvenation). (Read more about "Designer Vagina" procedures.)

Critics say the increasing popularity of vaginal cosmetic surgery reflects a society that scrutinizes even the most intimate parts of a woman’s body — and is fueled by an industry that feeds on female insecurity.

Surgeons who offer the procedures argue that the surgeries are not just cosmetic. These surgeries are used to treat medical conditions, including incontinence and sexual dysfunction. Some women undergoing the surgeries say they are enjoying greater freedom to modify their bodies than ever before.

Oliphant says her health issues hindered her lifestyle. “I exercise like a maniac,” she said, “and just imagine this: You go to a step aerobics class or a spin class, and the inside labia is longer than the outside labia, and add urinary incontinence to it. There’s rubbing, burning, itching and pulling.”

For five years, she searched for an answer until she found Dr. Troy Hailparn, a San Antonio cosmetic gynecologist who has performed more than 700 labiaplasties since 2003. She told Oliphant that her health issues could be addressed by labiaplasty and fixing the inner muscles of the vagina.

Within days of the surgery, Oliphant says, she was back at nursing school and feeling like a different woman.

Although Oliphant’s motivation for having surgery wasn’t cosmetic, she believes that women are under pressure to fit a specific model of physical beauty.

Dr. Cheryl Iglesia agrees. Iglesia is professor of obstetrics, gynecology and urology at Georgetown University School of Medicine and vice chair of the Patient Education Review Panel at the American College of Obstetrics and Gynecology. She has performed hundreds of labiaplasties for medical, not cosmetic, reasons.

“Don’t get me wrong. I’m totally OK with women if they don’t like a certain body part,” she said. “It’s their prerogative. What I am concerned about is when there is an idealized version of what is considered normal.”

In nature, normal means variation. The inner vaginal lips can vary in width from 7 millimeters to 50 millimeters and usually protrude past the outer lips. Ethnicity, age and childbirth can affect their appearance.

Hailparn, the cosmetic gynecologist who operated on Oliphant, believes that for some women, it’s not as simple as embracing the female anatomy they were born with.

“There are women born with huge labia who are perfectly happy with them and women born with a sliver on one side and a huge tongue on the other,” Hailparn said. “If you’re not comfortable in your own body, it’s like your anatomy is weighing you down and you can’t live life to the fullest.”

The idealized version of the vagina sought out by some women is less human and more Barbie-doll, Iglesia said. “I’ve heard people say what’s beautiful is a slit-like, symmetric, smooth vagina where the labia minora do not protrude. It’s a pre-pubescent version of the vagina, like what an 11- or 12-year-old girl has.”

“If you’re not comfortable in your own body, it’s like your anatomy is weighing you down and you can’t live life to the fullest.”
~ Dr. Troy Hailparn, a San Antonio cosmetic gynecologist

Some experts argue that pornography is driving the increase in vaginal cosmetic surgery.

Women seeking vaginal cosmetic surgery sometimes cite the media as reinforcing a particular ideal of what a normal vagina looks like. They also cite their partners’ desires.

“Frankly, if your partner doesn’t like your body parts, get rid of your partner,” said Jamie McCartney, a British artist who spent five years making The Great Wall of Vagina, a 26-foot-long art installation that depicts the vaginas of 400 women, ages 18 to 76. 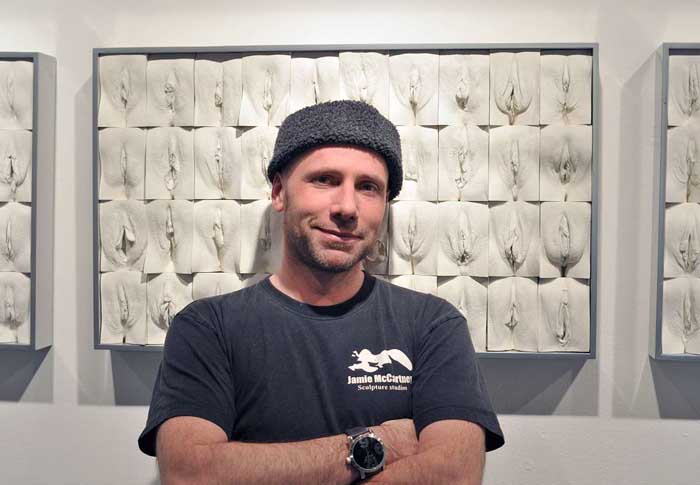 Artist Jamie McCartney stands in front of his art installation, The Great Wall of Vagina.

McCartney was disturbed by news reports about the increase in vaginal cosmetic surgery. In 2012, the BBC reported a fivefold increase in labiaplasties in the United Kingdom between 2006 and 2011. McCartney used plaster to make molds of vaginas and said he was inspired to show that women’s bodies come in many different shapes and sizes.

He felt women were compelled to change their anatomy because they were exposed to touched-up images of the female form in magazines. “Where does a woman go to find out what other normal women look like?” he said. “That’s why I made it.”

The term plasty in medicine means to mold and shape the anatomy to fix form and function. The earliest vaginoplasties performed in the early 1900s were mostly on women born without vaginas. Labiaplasties first appeared in the medical literature in the 1970s, when they were performed on women who had suffered trauma or were born with abnormalities. The first report of a cosmetic labiaplasty appeared in 1984.

Since then, the vaginal rejuvenation industry has boomed to become a multimillion-dollar one, although the American Society for Aesthetic Plastic Surgery hasn’t compiled up-to-date figures.

“Vaginal cosmetic surgery is big business,” said Iglesia, who believes that the marketing of vaginal rejuvenation surgery is misleading and capitalizes on women’s insecurities. “It’s really clever on the part of the people doing the marketing, but there’s a lot of non-truths in the advertising.”

Partly she feels that is due to a lack of evidence regarding the safety and efficacy of the procedures. Hailparn disagrees. “When health advocates say there isn’t enough evidence to show these surgeries are safe, that isn’t true,” she said. “That is said out of ignorance and emotion. This has been done for decades.”

Dr. Aimee Nguyen, a urogynecologist and surgeon, has been performing labiaplasties in her Frisco clinic for five years. She said more evidence is needed about the long-term safety of the procedure.

“The American College of Obstetrics and Gynecology (ACOG) are not huge proponents of cosmetic vaginal surgery, and the reason why is I don’t think there’s enough evidence behind it,” she said.

Studies that follow women after they have had the surgery report low rates of complications. In one study, just 2 percent reported any negative side effects after vaginoplasty, including pain and a vagina that was too tight.

Iglesia warns against accepting that data at face value. She said that many women who suffer after surgery don’t return to their original surgeon, instead seeking out a different provider with expertise in reconstructive surgery.

Oliphant, whose surgery was successful, is pleased that surgery offered her relief from the symptoms she had endured for years. “Yes, there are people benefiting from women’s insecurities,” she said. “But whether a woman does this for medical or aesthetic reasons, it’s her choice.”

This article appeared in the Dallas Morning News on May 11, 2015. Since this article, Dr. Hailparn wrote the first ever labiaplasty e-module on behalf of ACOG. It's used to educate other doctors about labiaplasty. Dr. Hailparn is a Board-Certified OB-GYN with advanced training in cosmetic-plastic gynecology procedures. She has performed over 3,500 vaginal rejuvenation, labiaplasty and other cosmetic gynecology procedures since 2003. To contact the Cosmetic Gynecology Center of San Antonio, call 210-615-6646 or use our contact form. We're happy to answer your questions or help you book a consult.

Get your Free Vaginal Rejuvenation E-book
×

I wanted to reach out and update you on how we’re approaching the coronavirus pandemic at the Cosmetic Gynecology Center of San Antonio.

As for our office, we are open and we are taking all reasonable precautions to protect our patients. We do have patients coming in for consults, along with in-office treatments and surgeries. We are scheduling one patient at a time in the office for everyone’s protection.

In addition, during these challenging times, if you do not want to come to the office for a consult, I will do a free 15-minute telephone consult with you. I will address your concerns, provide possible treatment solutions and answer your questions. Please email us at This email address is being protected from spambots. You need JavaScript enabled to view it. with your name and phone number. Put “Phone Consult” in the subject line. We’ll promptly get back to you to schedule that.

As we go forward, we’ll be sure to keep you updated and know that we always put your health first.